Construction of the No.3 Sea Fort

The most difficult work was No.3 Sea Fort

No.3 Sea Fort is located 2,611m south of the No. 2 Sea Fort and 2,589m north of the Hashirimizu low battery, with a water depth of about 39m and strong tidal currents. This construction work became the most difficult   military civil engineering work in the Meiji era.

(Incorporated Association) Japan Society of Civil Engineers: “Meiji Industrial History, Edition Civil Engineering edition” (1929.7.31) describes in detail the construction of No.3 Sea Fort, so let’s take a look at it. 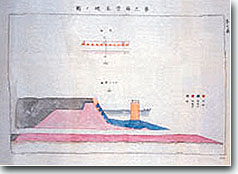 A pile of crushed stones were piled up on rubbles, and concrete was laid on for the higher part than the high tide to form an embankment.

The inside of the embankment was filled with sand. 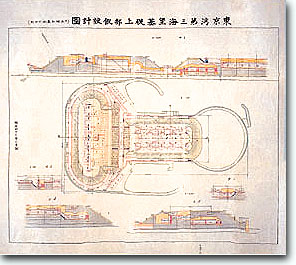 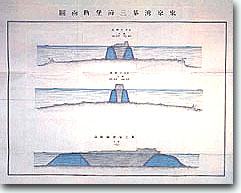 Therefore, we decided to install breakwater consisting of 13 concrete caisson boxes with a length of 14 m, a height of 7 m, an upper width of 4 m, a bottom width of 6 m, and a weight of 1,500 tons, outside of embankment.

In response, they cast 13 concrete blocks weighing 35 tons, and finally they could make it stable.

Armament of No.3 Sea Fort

In Meiji 34 (1901), Lt. General Shinroku Ishimoto, who was the head of the fortification HQ, asked Maj. Renne of Germany who was an expert of fortification, to observe the No.3 sea fort under construction, and asked him comments on this project whether it would success.

“There is no example of construction in such a deep sea around the world. It is reckless to construct No.3 Sea Fort in the sea with a depth of 40 m or more, and directly facing the ocean with strong sea waves. Therefore it requires the utmost care and well preparation for its completion.

In order to reduce further subsidence, it is good to put sands on the foundation and apply pressure to press the sand layer “was his comments.

It turns out that it was a rare large scale construction work worldwide, at that time.