Although there are no brick constructions such as barracks, bunkers and concrete constructions such as batteries that are remaining original initial figure, you can still see parts of bricks wall and confirm their masonry and measurements. The feature of the wall were that the way of brickwork was that of British and over burned bricks were used for outer part where likely to be damaged by weather as their nature of low water absorption rate.

In the book of “Meiji Industry history chemical industry edition”, they wrote in following way and were suggesting that many Kosuge Bricks Manufacture’s bricks were used for this Tokyo Bay Forts.

“It seems that the Kosuge Brick Factory was used for the Imperial Palace construction in Meiji 15th as purveyor, and most of it was purchased for the turret construction of the Ministry of the Army,” which explains the bricks procured by the Army during this period were all estimated to be bricks from the Kosuge brick mill. 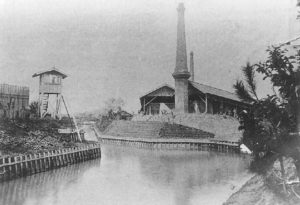 [Note] Kosuge shuuchikan (prison) is today’s Tokyo detention house at Kosuge Katsushika-ku Tokyo and at that time, brick manufacturing was  a part of prisoners’ labor of Kosuge prison before its facilities were heavily damaged by the Great Kanto Earthquake. 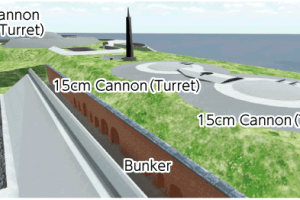 he appearance of the bunker reproduced(CG) 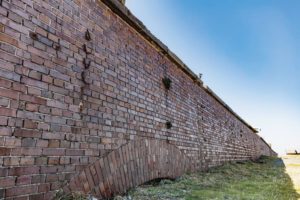 << Marks on bricks
>> Feature of battery and armament of No.2 Sea Fort