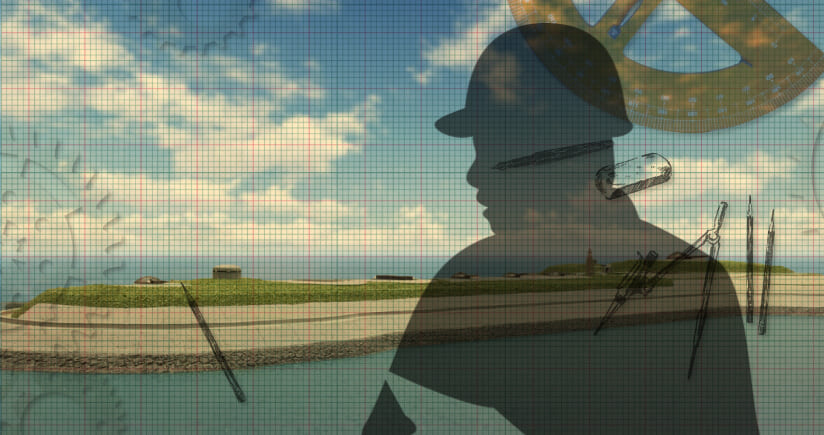 Akinori Nishida was born in Iwakuni (Yamaguchi Prefecture). At the end of the Edo period, it was Bunsei 10 November 23 (1828.1.9). The Nishida family served as a low-rank samurai, but also a construction and survey official of the Iwakuni Domains, and Akinori’s grandfather was an engineer in charge of repairing the Kintai bridge.

In Ansei 3 (1856), he inherited the family at the age of 29 and inherited the position of construction and survey official of the Domains. It is presumed that he was good at Wasan (maths) because of his occupation, and that it was the basis of technology. Also, it was said that he had learned English by advocating the abolition of kanji before the Meiji Restoration, and he seemed to be an extremely innovative person.

Becoming an architect from a captain of army engineer.

At the age of 44 in Meiji 4(1871), he was invited to Hyobusho (Ministry of Military) in Tokyo by Aritomo, Yamagata, and moved to Tokyo to work there. In Meiji5 (1872), he became a Kouhei Taii (engineer captain).  After that, he actively worked as an architect and engaged in construction of military barraks of Tokyo Chindai (corps), military academy, and Yasukuni Shrine.

At the age of 50, he committed in the Tokyo Sea Fort Construction project.

He was involved in Tokyo Bay Sea Fort after becoming a sea coast defense investigation officer in the Army Staff Bureau in Meiji 13(1880). On October 26 Meiji 14(1881), he integrated the construction cost of batteries at the bay mouth, including the Sea Fort Kaihou (No. 1 Sea Fort), and submitted the paper of “Tokyo Bay Mouth Battery Construction Fee Grant Request” to  the Chief of Staff Yamagata.

Even himself in diving suit

In the prospectus for the construction of monument of Akinori Nishida (1922), they praised his hard work saying that “Nishida gave up his promotion and devoted himself in the work as army engineer.When constructing the foundation of a sea fort, he left his Yokosuka home at 3 and 4 o’clock every morning and often returned home at 11 o’clock midnight until the top of the embankment appeared above the sea. In the meantime, he was directing on a stone carrying small boat and suffered countless typhoon damage.”

It is also said that he sometimes even put on diving suits to inspect the foundation of the seabed.

There is the Nishida family’s graveyard in Shinbaka (new grave) of Shotokuji in Yokosuka City, and in accordance with his will that “I want you to build my grave in a place where you can see the Sea Fort”, the grave of Akinori Nishida is in the corner viewing the Tokyo bay sea forts.

<< High construction technology that was requested to provide to United States.