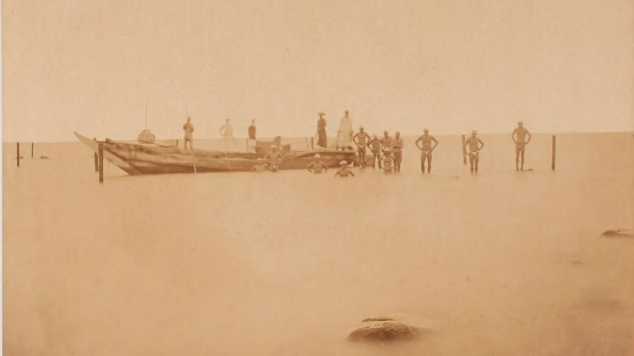 Construction of No.2 Sea Fort relied on human power

It is said that the construction of the No.2 Sea Fort had to rely largely on human power, and about 500,000 workers were employed. Although the actual situation of those workers is not clear, according to the “Nagashima Family Documents” (documents when an order was received from the Department of the Army for the construction of sea forts in the Meiji era), the main occupations of the workers were the sailors, divers, masons, carpenters, smiths, bricklayers, men labors and women labors.  You can see they were made up of a variety of skilled workers and supporting labor workers.

High wage for skill and wisdom.Were those construction workers well-off?

At the time when the average wages of fishermen were 38 sen, their wages were relatively high, with an average of about 60 sen for construction workers and about 80 sen for skilled workers, masons and bricklayers.

Of particular interest was that wages were set higher for skilled workers such as masons, brick layers, carpenters, and divers than those caretakers that seemed to be managers. This shows how important   skill and wisdom handed down from craftsmen to craftsmen were in the construction of the fort.

The construction work of a sea fort was a life-threatening task, and could not be accomplished without accumulation of workers’ persistent and steady work.

As the civil engineering experts say, that it is impossible to reproduce the No.2 Sea Fort even with the current technology, behind the execution of this tremendous project with national prestige was the achievement of many people who had no name in history. You can find out about it from the “Nagashima Family Documents” at that time.

<< A memorial to the monument of men who were martyred in the construction of fortress.
>> Construction schedule table